My Life Has Been Crazy -- But Wonderful

Things have been pretty different for me this year, but you can read this Yahoo! Voices column I wrote to catch up on a bit of it. I am doing really well, and the kids are well. I hope to post in the future, but right now, daily life is the first priority.

http://voices.yahoo.com/imperfectly-perfect-its-wonderful-life-12392095.html?cat=9
Posted by Kellie at 10:41 PM No comments:

I'm still alive! Too busy to write much here lately, but thought I'd share some of our photos from Mother's Day. My oldest made me a lovely breakfast and had lovely gifts waiting for me; the twins made me some homemade cards with the help of their big sister. We all headed to the Connecticut shore for a day by the sea. My parents have a special pass for seniors that allows free admission into state parks, so it was a frugal adventure with sun, sand, surf and a picnic lunch.

Hope you had a lovely day too!

I am merely a girl with a dream. A dream of a rustic rock wall in my backyard. But building a rock wall is not easy. So after waiting and waiting and waiting for a rock wall to just magically appear in my backyard, I decided to make matters into my own hands and create a rock "edge." It is not a wall, but an edge to my yard, marking where the grass (or where grass should be) and the woods meet. It's not beautiful, and it's not finished, but it's something. And I did it -- all by myself!

To me it's a metaphor, actually. It's kind of a "Stop dreaming, start doing" sort of thing. I'm tired of waiting around for my dreams, because I live in reality and reality can be kind of disappointing sometimes.

Eventually my backyard will be -- not perfect -- but better. And if moving a few rocks makes me feel like it's a step in the right direction, then I will move rocks! (My body is not *happy* but I'll count it as a workout :)

Of course, I still have dreams, but instead of dreams -- which might not happen -- I'll call it inspiration. Or "Pinspiration," since I tend to pin my dreamy inspiration on Pinterest.

Email ThisBlogThis!Share to TwitterShare to FacebookShare to Pinterest
Labels: In the Garden

The sun is finally out here.... It is a welcome sight!
Now if it will only warm up a bit, I would be very happy.

In other blog news, I am trying to work on "paying" writing assignments,
so my hope is to update this blog once a week for now.
Keep checking back -- it always means so much to that I see people reading.
Enjoy your week!
Posted by Kellie at 9:19 AM No comments:

Happy Easter Week! It's a busy time. I'm trying to juggle a lot lately, so blogging continues to take a back seat. I wish I could spend more time here, but alas, life gets in the way.

My tween has been busy-busy; she is currently getting ready for her school's Invention Convention and is involved in her school play, so I'm trying to manage the additional activities in addition to our regular happenings.

And now the Easter Bunny is getting ready to arrive! He's ready! He's finished his shopping! And we even have new baskets, as you can see in the photo above. I have been really wanting to splurge on the Pottery Barn baskets personalized with the kids names, but it would cost a small fortune for a once-a-year use for three kids, so I have resisted. I recently came across these baskets at Michael's,  and they were priced at 40 percent off. They cost me $25-ish for all three, and I think they are a cute look-a-like. I bought the little tags in the dollar area, and tied them on for an additional accent. I would love to figure out how to add their names to the little glitter wooden shapes, but I'm still working on that.

The baskets are not huge, but that's OK -- neither is the Easter Bunny's budget! My Easter rule is that the Bunny only brings what fits in the basket. Easter is not extravagant nor crazy-candy filled -- I'm sure the bunny will drop off things like Annie's bunny-shaped crackers, a small necklace, a toy car or two, a book or DVD, etc. A half-dozen inexpensive items with a chocolate bunny or two in the mix. Oh, and he hides a few plastic eggs around the house, with coins or small candy treats or little items. A half-dozen eggs per child is the basic rule of our Bunny visitor.

If you are still searching for last-minute Easter ideas, feel free to click on these links to my articles on Yahoo Voices:
I've tried to create helpful content for you! And everything I write is from my own experience and interests. In fact, I'm hoping to put my Babka recipe to good use tomorrow; we've read Easter books on a daily basis; enjoyed hot cross buns; cookie baking and egg dying (in my "frugal" article) will happen in the next two days too. I hope to make this recipe:

I hope you have a Happy Easter. I know that I have been counting my blessings more than usual lately. And I am officially sick of winter. There is still bits and bobs of snow on the ground here in New England, and I am really ready for sun, gardens, flowers, green grass and warmth. It's time, Mother Nature!

See you next week! Enjoy your holiday, and cherish every moment with your loved ones.
Posted by Kellie at 9:57 AM 2 comments:

Big Girl had a cooking class with Girl Scouts recently, and one of the recipes was for "Candied Apples." They were so good, we had to recreate them at home.

The recipe is very simple, and gives the taste of candy apples without the mess. You only need apples, water and Red Hot cinnamon candies. It took me forever to find those candies! I think I looked at four grocery stores before finding bags of them in Dollar Tree.

To make the apples, you dissolve one cup of Red Hots in 1/2 cup of water in a non-stick frying pan over low heat. It takes a while to dissolve them, so just turn on the stove top, and stir the bright red candies in the water every now and then.

While you are waiting, peel and cut up six small-to-medium size red apples into slices. Once the candies are dissolved, add the slices and cook over low heat for 45 minutes, turning every now and then.

Let the slices cook a bit and eat plain, or serve with vanilla ice cream and/or whipped cream. They are delicious!
Posted by Kellie at 5:00 AM No comments:

Email ThisBlogThis!Share to TwitterShare to FacebookShare to Pinterest
Labels: Recipes 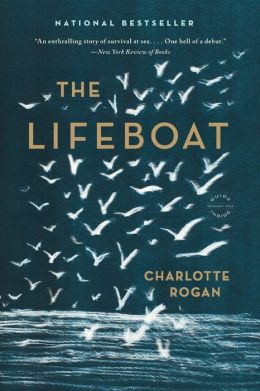 I had an opportunity last night to hear author Charlotte Rogan speak about her book, "The Lifeboat." Although I am ashamed to say I have not read the book -- I had to cover her talk for my job -- I am intrigued and would like to read it.

Rogan is a late-in-life published author -- this is her debut novel, and she is in her late 50s. She has found smashing success with this book, which was on the New York Times bestseller list, and I find her story quite interesting. For starters, she is a mom of multiples -- she has grown triplets, and started writing decades ago when her kids were small when her lawyer-husband was transferred to Texas. She didn't know many people initially, but used her lack of friends to turn to her passion for writing.

"The Lifeboat" is narrated by a young lady who is on trial for a crime committed on a lifeboat after a luxury liner sinks. The castaways spend 21 days on the sea, during which many questions and events unfold.

The inspiration for the story of “The Lifeboat” was found in one of her lawyer husband's law text. Rogan spotted a story about a 19th-century case where starving castaways, stranded on a lifeboat for weeks with little food, decide to kill and eat another passenger. They were rescued four days later and convicted of murder. Her book does not include the cannibalism aspect, but will appeal to fans of survival stories and anyone with a penchant for all-things-Titanic.

Posted by Kellie at 5:00 AM No comments:

Read My Articles on Yahoo! Voices 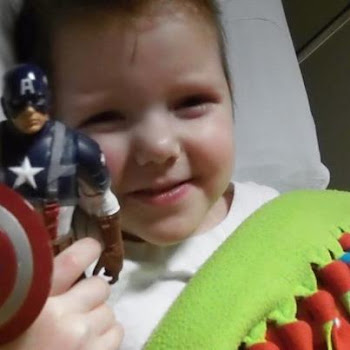 Contribute to the Ty Louis Campbell Foundation by clicking the photo above or visiting www.superty.org.